The timing of the 1848-9 rebuild could also be an important clue to the reason for replacing a church built just 10 years before. The early 19th Century had seen the rise in popularity of the Gothic Revival in architecture. This movement had begun in England in the late 1740’s and grown rapidly popular in the early 19th Century.

The Gothic Revival was popular throughout the world but it was a combination of factors in England and Wales that lead to what was known as the Victorian Restoration. This was a period during which as many as 80% of Church of England churches and cathedrals were refurbished and rebuilt in order to ‘restore’ them to the Decorated style of Gothic architecture.

This was in part a reaction against a shortage of churches in cities where the Industrial Revolution had led to increased populations without a corresponding increase in the number of churches and to the often poor state of repair of the existing ones. This lack of suitable worship space helped other religious groups such as the Methodist Movement and the Religious Society of Friends (Quakers) to increase in popularity. Comfortable, convenient venues for worship were springing up across the country in direct competition with the traditional church. Indeed the original Wesleyan Chapel in Newton was directly opposite the church – the white building, now privately owned, named Chapel House.

The Church of England was keen to draw worshippers back to the Anglican Church and embraced the suggestion by the Cambridge Camden Society and the Oxford Movement of a return to a more medieval attitude to churchgoing.
The Cambridge Camden Society was founded in 1839 and was initially a society for recording and discussing medieval church features. This soon moved on to suggesting that the only correct form for a church was the Decorated Gothic style. This matched the trend in society for all things medieval and the Gothic Revival.

The Oxford Movement advocated that instead of taking Holy Communion at the Pulpit the rite should take place at the altar in the Chancel. As this became popular it made sense for church designs to alter so that the pulpit was off to one side, to introduce a central aisle with a better view of the altar and to have a larger chancel to enable worshippers to receive Communion comfortably.

Not everyone embraced the Victorian restoration. Influential thinkers like John Ruskin and William Morris were opposed to such large-scale restoration, which was often at the expense of original features of the church. Like-minded individuals formed societies dedicated to preserving buildings – such as the Society for the Protection of Ancient Buildings (SPAB). Here at All Saints the top stage of the 12th Century tower was removed to make way for the spire.

The English Gothic style was popular from about 1180 up until 1520. There were three main periods within this timeframe:


It was the Decorated style which was particularly favoured by leaders of the ecclesiological movement such as the Cambridge Camden Society. They believed that it was the only style appropriate for a parish church. There was also some suggestion that this style of architecture was the product of a purer society and that was something the Victorians were keen to return to.

Decorated Gothic is characterised by elaborate window tracery. Windows are subdivided by mullions (vertical bars of stone), usually up to the level at which the arched top of the window begins.  The mullions then branch out and cross, intersecting to fill the top part of the window with a mesh of elaborate patterns called tracery. This typically includes trefoils (a three-leaved clover shape) and quatrefoils (four-leaved clover). Other shapes used include the dagger motif (one rounded end, one pointed) and the mouchette (dagger motif on a curved axis, rather like a teardrop). 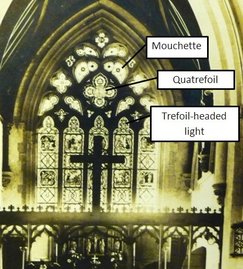 Gothic Features at All Saints

The geometric patterns such as the mouchette and the trefoil are found throughout the church. You can see them in the carvings on the side of the font, the clerestory windows and even the parapet of the upper stage of the tower.

Other Gothic features at All Saints are the pointed arches used throughout the church, the fleur-de-lys finials on the coping stones and the ballflowers on the buttresses and the memorial brass to the Dawnays in the chancel.

Perhaps the most common feature in the Gothic style are the hood moulds. These are projections from a wall over an opening and are designed to throw off rainwater.  At All Saints these are prevalent both outside over the windows and doorways and inside over the arches of the Nave arcade and the entrance to the Organ Chamber. At the lower end of the hood mould is a short horizontal section, designed to make sure the drips are well away from the opening. If this end piece is plain or of the same form as the hood mould it is known as a label stop. This comes from another name for hood moulds - label stones from the Latin labia meaning lip.

Alternatively these can be carved in the form of a grotesque animal, a floral design or, as is mainly the case at All Saints, a human head which is then referred to as a head stop.

Externally the head stops at All Saints feature an assortment of men and women, some regal, some fearsome. Higher up on the tower there are carvings in a variety of animal forms – some real, some mythical.

We don’t know whether the head stops were based on real people such as local dignitaries or simply someone the mason knew or if they were intended to be images of religious figures.  There is certainly a variety of expression on show; some appear pious, whilst others are quite frightening. One possibility for the popularity of head stops is that it followed on from the Saxon practice of displaying the heads of dispatched enemies on castle walls.

Inside the church, at the ends of the hood moulds above the arches of the arcade, are angel stops. These figures are holding instruments, a book or a scroll or have their hands clasped in prayer.