In 1838 William Henry Dawnay, 6th Viscount Downe appointed John Oates as the architect for plans to rebuild All Saints church. The first stone was laid on the 19th September 1838 and the new building was officially opened in 1839. This church was apparently of rather plain construction though some also described it as being rather handsome. We only know what this church looked like because of a sketch by the incumbent at the time Reverend Gatenby in 1843. The sketch shows that the church had a Nave and Chancel with a door in each, as well as the door in the Tower. 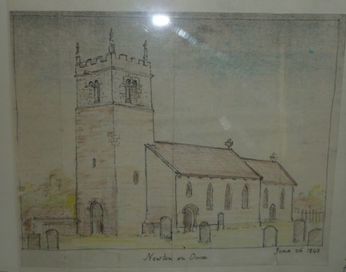 Sketch of the 1839 church by the Rev John Gatenby dated 26th June 1843.
The current building dates from 1849 after the Hon. Lydia Dawnay commissioned the York architect George Townsend Andrews to prepare the new design in 1848. It is strange to think that in those days they could plan and build a church in a little over a year and then within a decade decide it was no longer fit for purpose and design and build a replacement.

The exact reason for rebuilding the church within such a short timescale is unclear. Some feel that it was an attempt by the Dawnays to keep in with the fashionable London society by building a church in the popular Georgian style. Certainly the new building with its magnificent spire and beautiful stonework carvings would have had a huge impact on their guests as they passed by the church on their way to Beningbrough Hall, the seat of the Dawnays.

Another suggestion was that a fire in the church either required or gave a good excuse for the more opulent rebuild. Village pride was also at stake after the building of the Holy Evangelist church at nearby Shipton by Beningbrough which had a spire, something the 1839 building lacked. The stones from the 1839 church were used to build the wall which surrounds the churchyard.
George Townsend Andrews had already established himself as architect to George Hudson, known as the ‘Railway King.’ George Hudson was instrumental in establishing the London to York line, amongst others and G.T. Andrews was responsible for the design of several North Eastern Railway Stations.

The design of the church is typical of the Gothic Revival style that was fashionable at the time. The top stage of the Tower was removed and replaced by a more ornate design along with the magnificent spire. The top of the spire is 150ft above the ground making it a well-known landmark, visible from as far away as Brimham Rocks (20 miles).

The rebuild allowed the church to be extended outwards so that as well as the Nave there were two aisles. This allowed for the inclusion of the magnificent pillars where the Nave walls once stood. It also meant that the church could now hold a congregation of 300.