First from the East: the Nativity and Christ's Baptism 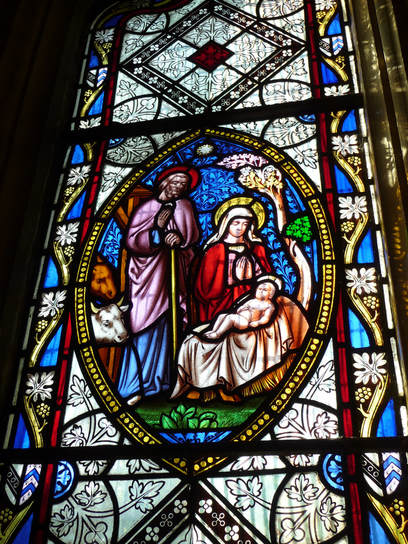 This window depicts the Nativity and Baptism of Christ. The nativity scene shows Mary and Joseph outside the stable with the baby Jesus lying on the manger.

The baptism scene shows Saint John the Baptist pouring water over the head of Jesus and the Holy Spirit descending on Jesus from heaven, in the form of a dove. Jesus is identified by the cruciform halo and John by the rough orange clothing (John as a wandering preacher is typically depicted wearing fur, in particular camel skin) and the long narrow cross which was a symbol of his missionary. The banner with the cross on it attached to his missionary cross is often shown in images of John and usually portrays victory over sin, death or persecution. In this situation it is mainly victory over death and sin as part of the sacrament of baptism. Participants are cleansed of sin but also enter death (symbolised by the water) and rise again with Christ.

The scroll at the top of the image contains the Latin translation of the first part of the declaration that God makes when Jesus is baptised, according to Matthew’s Gospel, ‘Hic est filius meus dilectus’ or ‘This is my beloved Son’.

At the bottom of the window is verse in Latin from Psalm 103:2  ‘Benedic anima mea dominori noli oblivisci omnes retributions ejus’ which can be translated as ‘Bless the Lord, O my soul, and never forget all he hath done for thee.’ 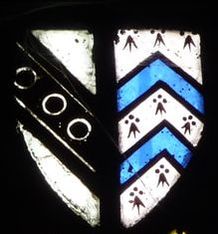 The background features typical Wailes foliate pattern. The diamonds above and below the biblical scenes are filled with ivy leaves and berries which are symbolic of eternal life because of the evergreen nature of the plant. The border of each light is filled with a climbing vine, complete with leaves and grapes as well as a heraldic shield.

The shield is divided down the centre and represents two surnames; this division is known as impalement as the entirety of each shield is shown as opposed to them being divided in half. 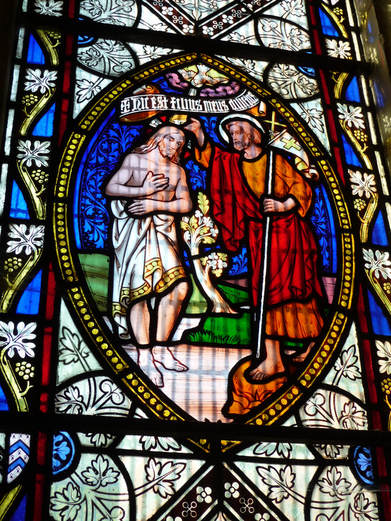 The right or dexter side (that is the wearer’s right, spectator’s left) was typically the most important and has the blazon of the Viscount Downe argent on a bendlet cotised sable three annulets of the field. This means a silver background with a black diagonal band containing three rings and two thinner bands running either side.

The left or sinister side shows the blazon of the Bagot family ermine two chevrons azure. Here the background is ermine (silver with black spots, representing the fur of the ermine/stoat in winter coat) with two blue peaks. These chevrons represent rafters (cheveron is French for rafter) and were intended to signify that the bearer offered protection.

The use of those two blazons together fits with the claim that this window was paid for by the Viscountess Downe as part of the rebuild. The Viscountess, Mary Isabel, was the daughter of the Right Reverend Richard Bagot. Her husband, 7th Viscount Downe William Henry Dawnay, was the elder sibling to Lydia FC and Payan Dawnay. William inherited the title but Beningbrough Hall was left to Payan.

Second from the East - memorial window to Margaret Earle 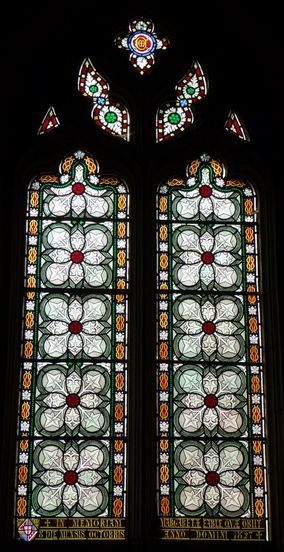 This window is dedicated to the memory of Margaret Earle neé Bouchier. She inherited the advowson of the church as part of the Beningbrough estate from her uncle Ralph Bourchier. As both Mrs Earle’s sons had died young she chose to bequeath the estate to family friend and distant relation Reverend William Dawnay, who was serving in Sessay at the time.

The knot pattern which repeats around the border of the lights is known as a ‘Bourchier knot’ and is a heraldic badge for the family. The same design can be seen cut into the lawn outside Beningbrough Hall.

At the bottom left of the window is a hatchment - a distinctive rendering of a dead person’s arms containing various heraldic designs relating to Mrs Earle’s ancestors.

The shield in the centre shows the coat of arms of the Bourchier family - argent a cross engrailed gules between four water-bougets sable or red cross with serrated edges on a silver background with four black waterskins. The top dexter and bottom sinister quarters represent the Earle family whose coat of arms is gules (red) with escallops (scallop shells) within bordure engrailed argent (silver serrated border).  We haven’t been able to identify the blazon in the other corners which features a griffin and three swords.

Next to the hatchment is the window’s dedication which can be translated from the Latin as ‘In memory of Margaret Earle who died 8th October 1827.’

At the very top of the window is a monogram – a combination of letters. It’s possible that this is a combination of an alpha and omega (first and last letters of the Greek alphabet), a crown to symbolise the Kingdom of Heaven, and an icthus (the fish symbol used to represent Christ). However it is also possible that it is just an ‘M’ inside an ‘E’ for Margaret Earle and whoever requested the window was keen for the lady herself to be remembered in people’s prayers.

The two windows on the south side of the Chancel are from the studio of William Wailes which operated in Newcastle-upon-Tyne between 1838 and 1914.

Wailes was originally a grocer and tea merchant. He made and fired small enamels in a homemade kiln and sold them in his shop. He studied stained glass design and production in Germany before setting up his own studio in 1838.

He produced designs for Pugin but the working relationship lasted only a few years. Pugin was known for going from studio to studio to find the cheapest rates. But Wailes was soon established in his own right – by 1851 he had 76 men working for him.

His style fitted in with the popular Gothic Revival of the time. He used bright colours and ornate foliate patterns. Work from his studio sometimes contains a monogram of his initials within a shield but it is not present in either of the windows at All Saints.